The Dangers of Interstate Trucking 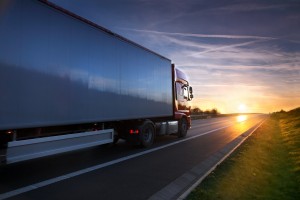 We all depend on commercial trucks to deliver goods from one end of the country to the other. But with that necessity comes some serious risk.

According to the U.S. Department of Transportation, total fatalities in crashes involving large trucks increased a slight 0.5 percent in 2013 to 3,964. While the fatalities had declined to a 40-year low in 2009, the numbers have been on the rise ever since.

In addition to the fatalities, more than 100,000 injuries occur, and an untold more affected by their loved ones’ ordeal. The impact has a ripple effect across our society.

So, why the increase?

While there are certainly some accidents attributable to poor driving decisions by passenger vehicles, many people point to problems in the trucking industry and a poorly executed regulatory structure.

Being a trucker is tough business. They are caught between restrictions on how many hours they can drive at one time and pressure from their trucking company boss to meet delivery quotas and tight deadlines. Not to mention, since their income is tied so closely to meeting these deadlines, making ends meet may mean being tempted to skirt restrictions at times.

All this leads to tired truck drivers who drive at unsafe speeds and with slower reaction times.

For example, a Chicago federal judge recently ruled that a wrongful death lawsuit related to a 2014 incident in Channahon Township, Illinois can move forward. In that case, a trucker was driving on Interstate 55 when it crashed into three stopped vehicles. Four adults and an 11-year-old girl were killed as a result. Three others were injured.

The lawsuit against the trucker alleges a number of things, including speeding, falsifying logbooks, and that he was unfit to drive because he is legally blind in one eye.

Speeding trucks pose dangers for various reasons, one of which is big rig tires malfunctioning. According to the National Highway Traffic Safety Administration (NHTSA), between 2009 and 2013, heavy trucks and buses were responsible for 14,000 fatal accidents. Of those, 223 deaths were related to truck tires.

Not only are their posted speed limits, but big rig tires have their own built-in speed limitations. The NHTSA says that most heavy truck tires are rated for a maximum speed of 75 mph, and none are meant to go more than 81 mph. However, 16 states have truck speed limits at 75 mph or more. This pushes a whole lot of truck tires to their breaking points.

While maintenance issues may also be a factor, some believe that these high state speed limits are the primary cause for concern… including the American Trucking Association (ATA).

“Raising speed limits at the state level is a bad idea beyond 65 mph,” said ATA executive vice president Dave Osiecki.
Osiecki says the trucking industry has been asking the federal government to regulate truck speed by using electronic limiters that would cap a commercial truck’s speed at 65 mph. Only 70 percent of trucking companies self-regulate by limiting their drivers.